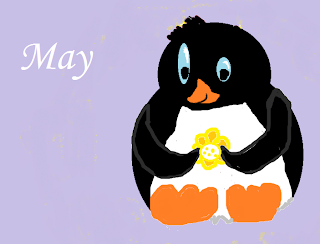 Well guys, it's the first of the month again, which means its time to crown the best book of April, and give you a little taste of what's coming in May.
Once again, there were a lot of great books in my pile this month, but the clear winner for favorite was Night Sky by Jolene Perry. I did not expect to love this book, but between the awesome male POV and the rich story of young love, I was enthralled. Go check it out, if you haven't already.

What's coming up in May?

Two reviews, already written, should be up for your amusement shortly. The first is for Bonds of Fenris, by S. J. Bell, which I liked quite a bit. The second is for Daphne and the Mysterious Girls Secret Bathroom Society, by Robert Shields, which I did not like at all. And I mean...not even a little bit.

And in our TBR we have:

A Good Man by Venessa Morgan

Symphony of Blood by Adam Pepper

And that's the official line up! What's in your TBR this month?
Posted by TheReadingPenguin at 1:30 AM