On Parasols and Octopuses 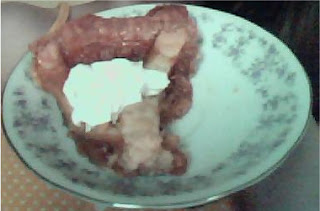 On this lovely Memorial Day morning I'm enjoying a breakfast of coffee and treacle tart. While this is both a decidedly un-American and un-breakfest-like meal, it is ideal when it comes to at last completing Soulless
by Gail Carriger!


I found this book to be completely delightful and wholly deserving of the high praise and many recommendations that lead me to read it in the first place. If I were grading on personal enjoyment alone I would give it five stars, but I try to be a bit more critical than that. So, on to my review.

Plot Summery! (SPOILERS): This is the story of Alexia Tarabotti, a spinster half-Italian Englishwoman and person lacking a soul. Her soulless state renders her capable of canceling out the supernatural powers of vampires and werewolves. Together with her inquisitive nature and incurable stubbornness, this often gets her into a great deal of unladylike trouble. For example, they lead to a series of encounters with Lord Maccon, the local werewolf alpha. Lord Maccon is investigating a series of mysterious vampire appearances and disappearances, which poor Alexia keeps getting mixed up in. He also takes an intense personal interest in Alexia.

Now, I found this book listed under fantasy and seem to always find the series in the fantasy section. However, I think it would appeal equally (if not more so) to romance fans. A decent amount of time is spent on the budding relationship between Alexia and Lord Maccon. Their banter is quite amusing. The actual fantasy bits have a steampunk feel--a lot of wacky yet menacing science. So I feel this book would appeal to a fairly diverse audience.

Alexia is a wonderful character. She's intelligent and forcefully independent, is blunt and honest in her mannerisms, and carries a weighted brass parasol as both weapon and accessory. Essentially she's a loveable miss-fit. Lord Maccon is equally appealing but a bit less well developed. He is similar to many alpha wolf characters that I've encountered in my reading expeditions--commanding, willful, loyal, and of course very attracted to our heroine. The secondary characters were also amusing and very appealing. Those that stand out most to me are Ivy Hisselpenny of the horrible hats, Lord Akeldama the gay vampire, and Professor Lyall the pack beta. All distinct, memorable, and likeable.

As for the plot, it has it's flaws. It flows all right, but gets a bit slow at times and relies pretty heavily on coincidence to progress forward. Alexia doesn't precisely save the day, but she is present for all of the action and helps a great deal. I've grown used to the alpha females of urban fantasy who run in guns blazing and fix everything themselves, and this wasn't like that at all. But at least she's not helpless. Furthermore, I found the ending satisfactory, is just a touch sugary sweet. There is also a notable amount of sequel baiting including the unexplained mystery of the brass octopuses.

As I mentioned, this was a five star book for personal enjoyment. It would be a four star book after honestly evaluating it's flaws. So I'll split the difference and give it a 4.5.

Incidentally, on of the ways I first heard about this book was the this cool little promotional link: behold, paper dolls!
Posted by TheReadingPenguin at 11:05 AM No comments:

with much enjoyment. I'm only a bit over halfway done, so I won't share my detailed thoughts on it just yet, but it has served to inspire me to attempt the baking of my very first treacle tart. After seeing it mentioned in countless historical novels (and in Harry Potter if I recall correctly) it has long been stuck in my head as a thing to try, and I've finally done it!

It was quite an endeavor. I first obtained a simple looking recipe and set about gathering ingredients. The most challenging among theses was the golden syrup, which is surprisingly difficult to come by in the United States. Once my syrup had arrived and everything else was in place it was easy enough to make, though I confess I cheated and used store bought pie crust. I'm happy to report that it was a rich and tasty little pie with a strong take of ginger and lemon. It was especially enjoyable over tea.

In other reading news I have (at last) completed Kushiel's Chosen by Jacqueline Carey, the second in her epic historical fantasy series. So on with my review!
It's been over a year since I finished Kushiel's Dart

, toward which my feelings were generally positive. I have
a friend who loves these books very deeply, has read them many times and is able to recall the most minute trivia from them on command. Sadly I'm not nearly such an expert. But I can say that, so far, I've been impressed by the scale of the story, it's intricate detail, three dimensional characters, and overall satisfying delivery.

I did not find Kushiel's Chosen to be quite as complex or epically enormous as Kushiel's Dart, and I feel that this is a positive fact for the most part. The story follows Phedre in her quest to discover where the traitor Melisande has fled to. If you've read the first book you are aware of Phedre's conflicting feelings toward Melisande, as well as how potentially dangerous the woman is. Phedre is accompanied in her journey by several loyal companions, most notably Joscelin. With their relationship in turmoil and Joscelin following his own private missions, much is uncertain. I am simplifying for the sake of brevity, because of course there is much more to the story than can reasonably be summed up.

The good parts? As said, the scale is just a bit smaller and therefore easier to follow. I was already someone familiar with most of the relevant characters, and thankfully their are few to be concerned with. The characters that are mentioned are, for the most part, more distinct and three dimensional. Phedre goes through quite a bit and changes just a little as a result. There are a lot of adventure elements that I enjoyed--pirates, deadly spirits, gods, and magic.

Negatives? Now, I'm aware that this is not a romance series. However, one of the things that I loved about Kushiel's Dart was the development of the romance between Phedre and Joscelin. Joscelin is not in this book as much as I would have liked. Most of the time, their relationship is on the rocks. I won't give away the manner in which this is resolved, but I will say that I thought it was a bit hasty and unsatisfying. Also, at times Phedre frustrated me with some of her choices. She's a very intelligent and skilled character, but all to often her successes are dependent of luck or the ingenuity of others. That detracts from her likeability a bit.

These are the sort of books you read on cross country road trips or during extended layovers, because they are guaranteed to keep you occupied for a good long time. They are full of political intrigue, magic, and sex. I would recommend this book to fantasy fans. 4 stars.
Posted by TheReadingPenguin at 7:44 PM No comments:

My Kindle and I, A Love Story

Several months back I received a brand new shiny Kindle from my fiance as a fifth anniversary present. One might suspect that after five years I would have preferred something along the lines of fine jewelry. But having been an avid reader since childhood, my loved ones have long since caught on that books and all things book related make much better presents then anything traditional. Thus, the Kindle.

Now, I have to confess that when e-readers first made their way onto the market I was firmly against them. When I say that I love books, I don't just mean that I enjoy reading. I love going to bookstores and wondering amongst the shelves searching for treasures. I love the bright covers and the clean white pages. I love the way books smell. At any given time I have half a dozen stacked next to my bed waiting to be read, and loads more crammed into bookshelves and cubbyholes. E-readers seemed
to fall short in comparison. The flashy screens and multitude of buttons seemed more like a computer to me, cold and impersonal. And while I could to some extent understand the advantage of having thousands of books stored on one little device, I insisted I didn't need that. I was perfectly happy carting my paperbacks from place to place in my over sized purse.

My attitude changed slightly when I began college and started working in my school's library. I work many night shifts, sitting at the circulation desk ready to help patrons in need. We are encouraged to read or do homework at the desk during slow shifts. My reading material consists of a lot of romance, fantasy, and horror. The covers of these tended to cause raised eyebrows from supervisors, coworkers, and patrons--the clear message being that I should not be wasting my time with junk like that.

Had this potential embarrassment been the only issue I would have mentally told them all to go to hell and kept right on reading. But then there was the problem of semi-frequent interruptions causing me to loose my place, bookmarks being elusive and frequently lost. All of the trekking from building to building started to take a serious toll on my books as well, with many a poor paperback getting crushed at the bottom of my bag. There were issues of storage space, since my dorm only offered one small shelf above the desk which barely had room for my school books.

The bottom line is, e-readers started to look more and more appealing. I started quietly shopping around and trying to figure out if I could really justify the purchase. I liked the Kindle the best because the screen isn't the bright and flashy LCD of many others that I looked at--it looks a lot like paper instead. I debated buying it for a long time before finally being spared the expense when my sweety surprised me with it on our big Five Years.

My Kindle, who I affectionately named zippy, has served me pretty well. I bought it a carrying case, and it fits in my bag better then most traditional books. It's happy to hold my place for me, even when I have to walk away from it unexpectedly. I've stored many books on it to satisfy my changing moods, and buying new books is pretty much instantaneous. It has many silly little features that I hardly think to use, like the "text to speech" robot voice that reads to you. And it has many useful features like the ability to highlight and save quotes. 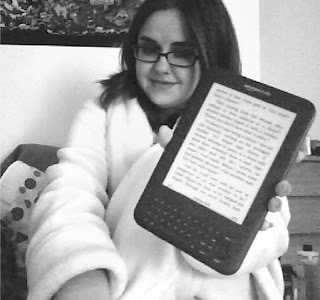 This does not in any way mean that I've given up my paper books. There is still a part of me that's a purist when it comes to the reading experience. So my shelves are still filled, and my TBR pile still sits next to my bed, and when I'm at home I generally reach for regular books over the Kindle. But in the end, I'm glad that I switched to e-books for on-the-go purposes. I'm committed to reading as often as possible, and this is just one more way to make that possible.
Posted by TheReadingPenguin at 11:36 AM No comments: