Blog Tour Review of Summer Before the Storm by Gabriele Wills 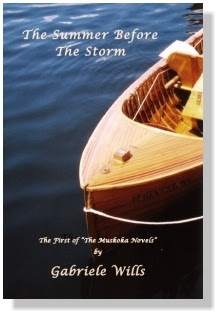 Historical fiction reviews are rare around here. Not because I don't like historical fiction, but rather because there are so many other books that take priority. It's nice to change things up now and then.

Set in Muskoka, a popular Canadian vacation spot for the wealthy and privileged, this book follows the joy and trials of one family just before, and after the start of World War 1. The first half of the book details the charmed lives of the islands' inhabitants, as they attend balls, canoe, skinny dip, fall in and out of love, and squabble over family money. The second half deals with the start of the Great War and how it affects the lives of our bright young characters--with many of the men enlisting, and everyone else trying to do their part.

While I am by no means an expert in history, this book felt rather realistic and authentic to me. I have to believe that the author spent a lot of time on research and really immersed herself in the era, so that readers could in turn become immersed in the era. I really enjoyed the details about the lifestyle of the women in particular. On one hand, they are terribly sheltered and still politically powerless. Their bathing outfits include stockings and caps. On the other hand, you see a lot of spirit among the female characters, with several of them trying to further their educations, becoming doctors and mechanics and the like. It's a time of progress, slow though it might be, and the author captures that very well.

For me, the second half of the book was far more enjoyable than the first. I loved the drama and pain of the war, and how the characters are forced to change to survive. The character development is fantastic. Victoria, once one of the more immature members of the family, goes through great trauma and comes out of it with a stiffer backbone.

I love how flawed the characters are, and how even the best of them make terrible choices and errors in judgement.

The biggest flaw is the shear number of characters that the book asks us to keep track of. Even with a cast list at the beginning of the novel, I found it impossible to get them all straight--I felt like I needed to take notes. I think that's why the second half of the book is so much stronger--it focuses more on just a handful of characters instead of the dozen or more that we meet in the first part.

I would recommend this book to historical fiction fans. It has a lot of rich period detail. It has romance and emotional turmoil. It has a bit of action and a lot of drama. Overall, it's a very enjoyable read. 4 stars.

Posted by TheReadingPenguin at 1:04 PM